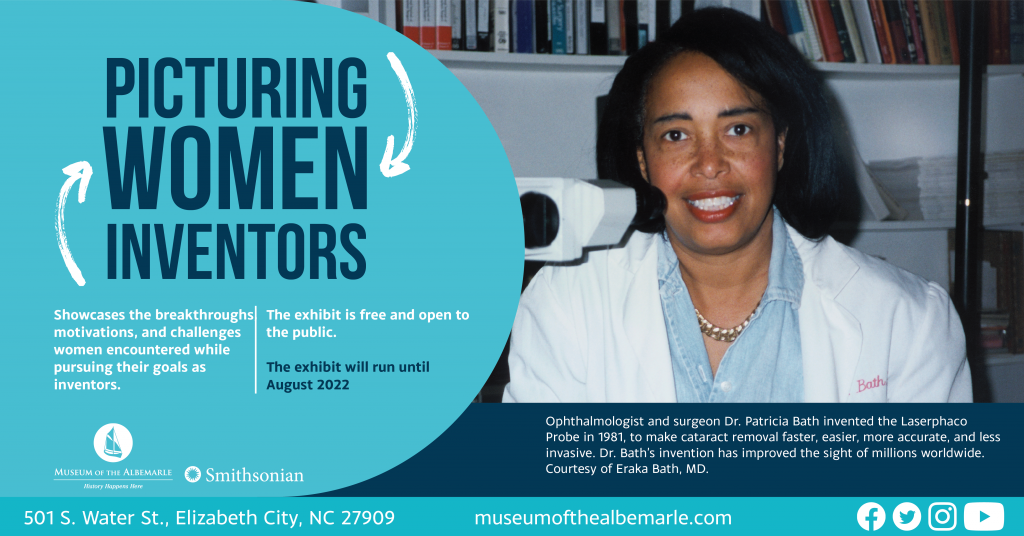 “Throughout American history, women with diverse backgrounds and interests created inventions that changed lives every day. But women haven’t always had equal opportunities to be inventors or received as much recognition. The Smithsonian and the United States Patent and Trademark Office present “Picturing Women Inventors,” a poster exhibition that explores the inventions of 19 highly accomplished American women. Astronauts, computer pioneers, and businesswomen join athletes, engineers, and even teenagers in this remarkable group of inventors.” The posters will be on view at the Museum of the Albemarle beginning October 22, 2021.
“Picturing Women Inventors” showcases the breakthroughs, motivations, and challenges women encountered while pursuing their goals as inventors. The poster exhibition highlights stories of inventors like Marilyn Hamilton, who after a hang-gliding accident in 1978 left her paralyzed, invented a lightweight wheelchair that was easy to maneuver. Diversity of background and age are showcased including inventor Alexis Lewis, who at 12-years-old in 2011 was inspired to adapt a traditional Native American sled, called a travois, by adding wheels to create a simpler way to transport families and their belongings in Somalia.
Although not mentioned in this particular exhibit, viewers would be interested to know that Elizabeth City native Nannie W. Hunter received a patent in 1867 for her solution to creating a better smelling soap. Additionally, Raleigh native Beulah Louise Henry (1887-1973) was an extremely creative and talented inventor whose abilities credited her with the nickname “Lady Edison.” After later moving to New York City, she started two companies, received 49 patents, and was credited with over 100 inventions.
This poster exhibition was designed to educate and inspire young people to see themselves as future inventors. “Picturing Women Inventors” is distributed at no cost to schools, libraries, museums and community organizations by the Smithsonian Institution Traveling Exhibition Service in collaboration with the Lemelson Center for the Study of Invention and Innovation and the United States Patent and Trademark Office. It’s sponsored by Lyda Hill Philanthropies IF/THEN Initiative and Ericsson.
SITES has been sharing the wealth of Smithsonian collections and research programs with millions of people outside Washington, D.C., for more than 65 years. SITES connects Americans to their shared cultural heritage through a wide range of exhibitions about art, science and history, which are shown wherever people live, work and play. For exhibition description and tour schedules, visit www.sites.si.edu.
The Lemelson Center has led the study of invention and innovation at the Smithsonian since 1995. The center’s activities advance scholarship on the history of invention, share stories about inventors and their work and nurture creativity in young people. The center is supported by The Lemelson Foundation and located in the National Museum of American History. For more information, visit www.invention.si.edu.”
Please visit the Museum of the Albemarle to view this and other exhibits Monday-Saturday 10am-4pm. The exhibit is free and open to the public. The exhibit will run until August 2022.